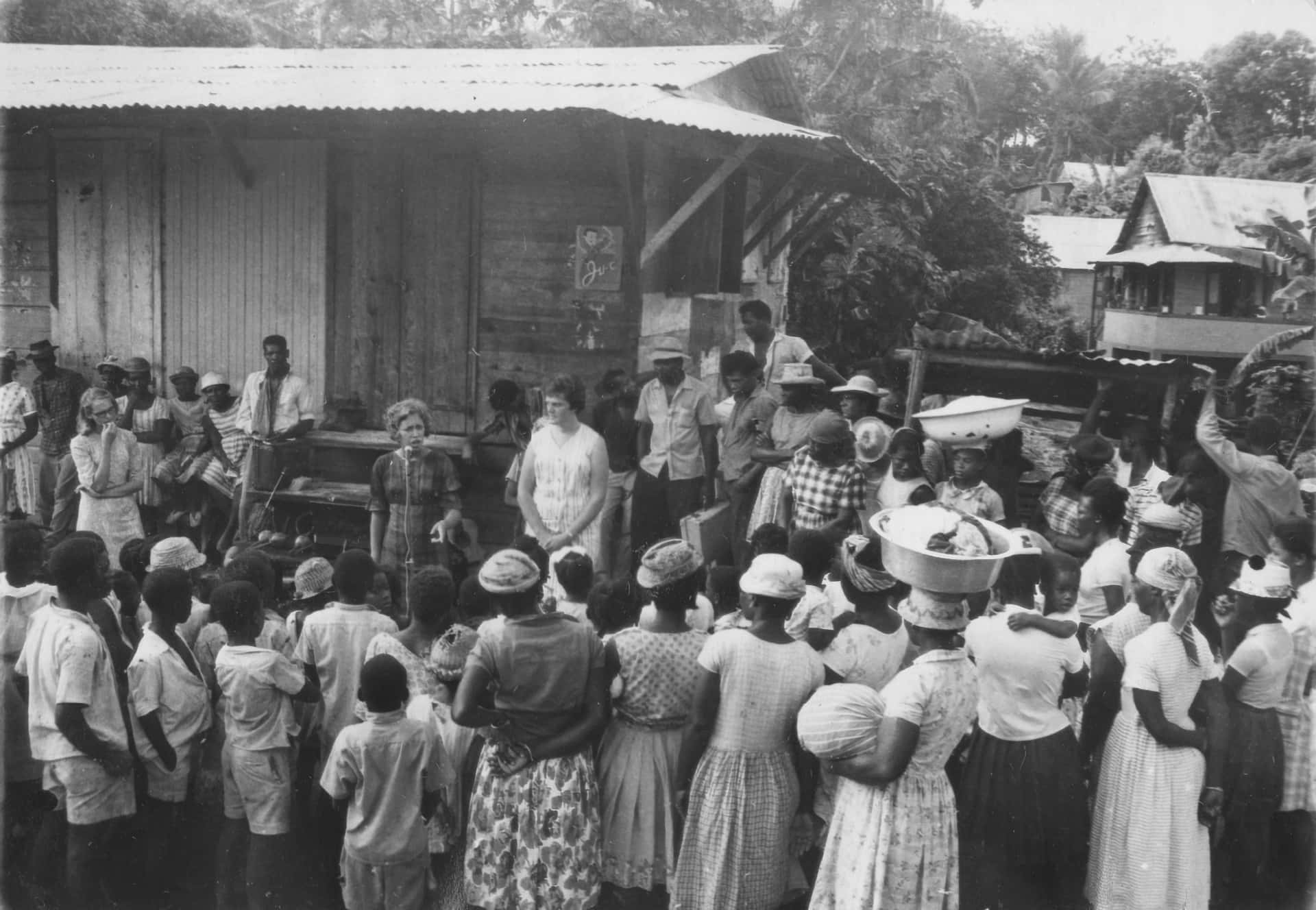 From a late-night vision given to a 20-year-old in the Bahamas to a global ministry with over 20,000 workers, the growth of YWAM is the story of God’s inspiration, God’s grace for many mistakes, and the creativity of the Holy Spirit’s leading.

The heart of YWAM –to worship God, to serve God’s global purposes, and to champion young people– remains as strong as it was in the beginning.

It all began with a vision. In June of 1956, Loren Cunningham, a 20-year-old student from the United States, spent a part of his summer break in Nassau, Bahamas touring with a singing group.

One night after a busy day, Loren had an unusual experience. “I lay down on the bed,” he recalled, “doubled the pillow under my head and opened my Bible, routinely asking God to speak into my mind. What happened next was far from routine.

“Suddenly, I was looking up at a map of the world. Only the map was alive, moving! I sat up. I shook my head, rubbed my eyes. It was a mental movie. I could see all the continents. Waves were crashing onto the shores. Each went onto a continent, then receded, then came up further until it covered the continent completely.

“I caught my breath. Then, as I watched, the scene changed. The waves became young people–kids my age and even younger–covering the continents. They were talking to people on the street corners and outside bars. They were going house to house. They were preaching.

“Was that really you, Lord? I wondered, still staring at the wall, amazed. Young people–kids really–going out as missionaries! What an idea! And I thought ‘Why did God give me this vision?’ ”

Youth With A Mission Officially Established

In the summer of 1960, Loren graduated from college. With the vision still on his mind, Loren led a youth mission trip to Hawaii. While there, he developed more of the vision for a new organization. This ministry would send young people out after high school to gain a sense of purpose. It would welcome all Christians no matter what their denomination.

He started that organization, Youth With A Mission, by the end of the year. Two years later, Loren married Darlene Scratch. Together, they are viewed as co-founders of YWAM today.

By 1966, YWAM had grown to 10 full-time staff and now attracted hundreds of summer short-term volunteers. YWAM teams were being sent to the West Indies, Samoa, Hawaii, Mexico, and Central America.

In 1970, YWAM bought the hotel in which it held its first school, and made Lausanne, Switzerland YWAM’s first permanent location. The building offered classroom space and housing for YWAM students.

The Mission Builder  program began in 1971, providing a way for individuals and groups to assist YWAM centers in practical ways.

By 1972, YWAM had a total of 40 full-time staff. That year, nearly 1,000 YWAM volunteers participated in an outreach to the 1972 Munich Olympics. This was the first of many YWAM Olympic outreaches.

In the midst of the Jesus Movement in the 1970s, a YWAM leader, Leland Paris, asked a student about his religious background. “Drugs,” the young man replied. After consulting with Loren and other YWAM leaders, Leland began a school that would focus on biblical foundations and character development as well as missions. It was called Discipleship Training School.

King’s Kids, a YWAM ministry to involve children and teenagers in missions, was founded in Kona, Hawaii.

YWAM leased the Pacific Empress Hotel in Kona, Hawaii in 1977 and began the cleaning process and renovations in order to turn it into a campus. YWAM called the training center Pacific and Asia Christian University.

Loren Cunningham had a long-time vision of a ship ministry, which was finally realized in 1979. The first ship, named “Anastasis” (the Greek word for Resurrection), became the first in a fleet to be known as Mercy Ships–a ministry which would provide hope and healthcare to the needy in port cities around the world.

YWAM had 1,800 full-time staff by 1980. Two of them, Steve and Marie Goode, heard about the Cambodian refugee crisis in Thailand, and decided to go there to help. They ended up directing YWAM’s refugee camp ministry.

YWAM’s efforts to reach those far from the message of the gospel took greater shape with the forming of YWAM Frontier Missions. Today, Frontier Missions has grown into one of YWAM’s largest global ministries, with over 2,000 workers worldwide serving with the goal of going to places where no Christian witness exists

In 1987, YWAM Publishing moved from Hurlach, Germany to Seattle, USA. Within the next decade, the ministry released over 150 titles. It now distributes hundreds of books.

YWAM changed the name of Pacific and Asia Christian University to University of the Nations (U of N) , which now offers courses in Bible, mission, communication, counseling, science, and many other areas.

30-Days of Prayer for the Muslim World Begins.

The 30-Days Muslim Prayer Focus, initially a small effort only within YWAM, began in 1993, and has now been embraced by denominations and organizations worldwide. The prayer focus coincides yearly with Ramadan, the holy month of fasting in Islam. It calls upon Christians to make a concerted and respectful effort to learn about, pray for and reach out to Muslim neighbors across the street and around the world.

Launched in 1994, Impact World Tour  organizes city and country-wide evangelism campaigns that feature skateboarding, break dancing, feats of strength, and cultural dances. Many people have committed their lives to Christ on five continents through these campaigns.

YWAM.org was launched in 1995. It continues to serve as a doorway into YWAM, connecting visitors with thousands of local YWAM ministries and websites around the world.

From 1996 to 1999, The Reconciliation Walk marked the 900th anniversary of the First Crusade by gathering Christians to walk the 1,500 miles of the Crusade route. As they went, the participants proclaimed verbally and on printed leaflets their regret for the way the Crusades misrepresented Christ. Over 2,500 people participated in some portion of the Reconciliation Walk. Wherever they went, the walkers were met by overwhelmingly positive responses by media and by individual Muslims, Orthodox Christians and Jews. In Turkey alone, an estimated 70 percent of the population heard the message. The deputy mayor of Istanbul commented: “This project is very important to Turkey. You can see how much it means to the Turkish people when they line both sides of the road and applaud.”

During YWAM’s 40th Anniversary, YWAM unveiled a new logo for the organization, the logo that is still used today. YWAM also celebrated having over 11,000 staff of all ages, from over 130 countries, and the mission was over 50 percent Non-Western.

YWAM and other major mission organizations partnered together in an effort known as Table 71. The purpose was to reach those people groups around the world who were unreached and unengaged by the message of Jesus. Through the partnership, multiple new ministries were started, including: the International Orality Network, OneStory partnership, Finishing the Task, and Call2All.

Leaders of YWAM and Mercy Ships agreed to release Mercy Ships to become a separate ministry. Mercy Ships still continues, and uses a hospital ship and land-based programs to bring medical assistance and long-term sustainable development to some of the world’s poorest regions. After the departure of Mercy Ships, YWAM’s ship ministry continued. Marine Reach, a YWAM ministry, had already been operating ships across the Pacific for 13 years. YWAM’s ship-equipped ministry has grown ever since then. Some of the ships include the YWAM PNG, the Pacific Link, the Next Wave, the YWAM Liberty, and the Pacific Hope. YWAM also operates numerous other vessels such as yachts, river boats, launches, barges, and houseboats around the world. YWAM’s ships offer medical care, transportation for evangelism teams, ground-based training of local care workers, mobile mission training, and cataract and dental surgeries.

An Impact World Tour throughout New Zealand in 2004 resulted in the message of Jesus being taught to over 315,000 people in meetings, schools and prisons, and an additional 500,000 through TV. More than 23,000 people made the decision to follow Jesus through this single tour.

YWAM Celebrates 50 Years of Spreading the Word of God.

YWAM celebrated 50 years of existence in 2010 with multi-cultural festivities all around the world. With more than 18,000 staff and over 1,200 ministry locations, it is now one of the world’s largest missionary training and sending organizations.

At a meeting in Tijuana, Mexico, YWAM’s global leaders moved YWAM toward a model of leadership that was more biblical, more inclusive, and more God-focused. This process had begun in 2001 when YWAM’s founder, Loren Cunningham, sensed a warning from God. Loren urged leaders not to let budgets and structures dominate but instead to be led by “the voice, vision, and values of the Lord.” After years of considering how to apply Loren’s message the 2013 meeting participants settled on a way forward. Their recommendations have been built upon in subsequent years and now form a model for how YWAM’s leadership functions, especially at the level of countries or groups of countries. They recommended that in any area of the world, YWAM’s leaders should be recognized for their character and spiritual track record. They would be referred to as “elders” after the term for spiritual leaders used in the New Testament. They could be of any age or gender. These leaders would be invited to join regular gatherings at which they could seek God, discuss issues, and learn from each other. The conveners of these gatherings would not keep their role for more than two or three years, but then would turn the convening role over to another of the elders in their area. These groupings of elders would be called Area Circle Teams. These Area Circle Teams now have been formed around the globe and meet together regularly.

In Pattaya, Thailand over 3,900 of the YWAM family from 100 nations and 77 languages came together for YWAM Together, the largest YWAM family gathering to date. It was evident that the great majority of YWAMers are no longer from Western nations; both the upfront leadership and the crowd were primarily Asian with hundreds from Africa, Latin America and the islands of the Pacific. They worshipped God, heard stories of what God had done in many nations, met others with similar interests, and made new friends. The participants also spent a day reaching out to the city of Pattaya during which they distributed 110,000 gospels of Luke.

YWAM and a few other organizations put out an invitation to young people to gather and commit themselves to respond to Jesus’ call to go to the nations. These events were called The Send. At the first event, in Orlando USA in 2019, 58,000 people came and many made commitments to missions. At the second, in Sao Paulo and Brazilia, Brazil in February of 2020, 140,000 attended. The average age was 24. At the Brazil events alone 18,400 made five-year commitments to get involved in cross-cultural mission.

YWAM Responds to a Global Pandemic.

As Covid-19 impacted country after country, many YWAM workers distributed food to the hungry in their neighborhoods. In September 2020 YWAM also united for a Global Prayer Initiative. This month of prayer included virtual gatherings that connected many of YWAM’s centers across the world. YWAMers sought God to repent, remember, realign, and release.