Reaching out to Christians in Pakistan 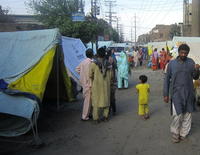 On the morning of 9 March 2013, residents of a Christian neighborhood in the city of Lahore, Pakistan, fled for their lives following reports that a large mob was on its way to raze their homes to the ground. Kala Jee was there at the time: “The police came and told us to go away,” he recalls. A big, angry mob of 7,000 Muslim men had gathered on the main road; they had sticks and chains with them. “We left and spent the next two nights with families elsewhere,” Kala Jee adds.
The now nearly empty neighborhood of Joseph Colony was looted and the homes of 250 families and at least two churches were torched. It is reported that hundreds of Bibles were also burned. The hostile emotions leading to this destruction were stirred up after a young Muslim man alleged that his long-time Christian friend had committed blasphemy.
Christians in Pakistan make up just 1.6% of the population and are largely uneducated, poor and marginalized. Previous attacks on Christian communities include the destruction of the village of Shantinagar in 1997, and the burning of the Christian district of Gojra in 2011, when nine people lost their lives. As on previous occasions, immediately prior to this recent attack the police warned Christians to evacuate. However, though their departure prevented physical violence, it left their properties vulnerable to destruction.
Around three hundred families have been affected by the destruction of property; people are destitute and going hungry. The government has promised that funds to repair homes will be allocated and that they will compensate each family up to $5,000. In the meantime, families are growing more desperate, wandering aimlessly around the shells of their burned-out and looted homes. In the immediate aftermath of the attack, people took shelter at night with other families, themselves living below the breadline; now they have been moved into a tent city.
YWAM Pakistan has had experience in responding to the needs of disaster victims. They were part of the response to the 2005 earthquake, and the 2010/11 floods. At various times, they have offered assistance to persecuted Christians in scattered villages and colonies in Punjab and Sindh, the two largest provinces of the nation. As a result of this experience, YWAM has good collaborative relationships in the region, and is working with others to deliver immediate aid to bring stability and security to the minority Christians currently accommodated in tents.
YWAM Pakistan is also involved in long-term development, seeking to educate and train future leaders within this minority group. They are researching long-term development solutions, such as the founding of a school and leadership training for children and young people.