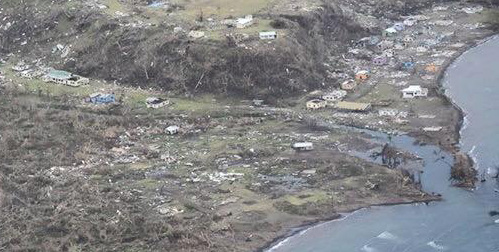 Cyclone Winston struck Fiji on February 20 and destroyed thousands of homes with more than 100,000 people displaced, without shelter, food or water. YWAM Fiji is now organizing outreach teams to help with rebuilding. Many families of Fijian YWAM workers have been affected.
On Koro Island, among the hardest hit by the storm, is a beautiful village called Nasau, the home town of Inia Saranuku, who works with YWAM Townsville, Australia. After the cyclone, with phone lines and electricity down in his village, Inia tried for six days before he could finally contact his family. 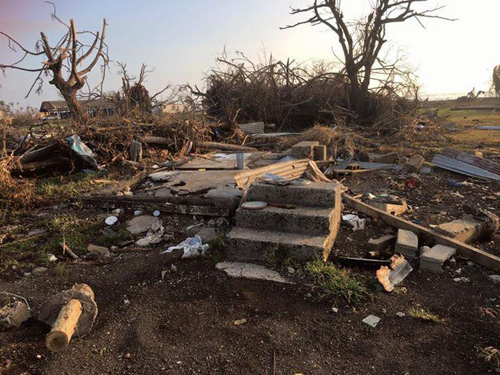 Remains of the Saranuku family home

“When my mother first heard my voice, she cried. It took her a while to finally be able to share their story and how they miraculously survived,” Inia said.
When the cyclone hit, Inia’s parents, brothers and sisters all sought shelter in the family home. They expected strong winds but they didn’t expect tidal waves as well.
As the first wave hit, Inia’s brother cried out, “If we don’t leave now, we’re going to die.” One of the walls of the house collapsed on Inia’s father, but he was able to pick up Inia’s four-year-old sister and make it out. The water was up to their waists.
As the family swam toward higher ground, the second wave hit. Inia’s nine-year-old sister was swept off of her mother’s back, but was able to hang on to a tree. Her parents found her, rescued her, and the whole family swam and waded about a kilometer before they came to a tree on higher ground. They huddled there for seven hours.
Inia said, “In the midst of the devastation, my mother shared that she had a confidence they would be okay. She spoke reassuring, hope-filled words over my family as the children sought warmth under her clothes.”
They finally made it to their pastor’s two-room house where 80 people crammed inside for shelter.
The death toll has now risen to more than 40 people. One of the lives lost was Inia’s cousin’s 10-month-old son, who was swept from his mother’s arms by a huge wave. In a country of only 900,000 people, not many have escaped the impact from this category five cyclone, the worst storm to have ever made landfall in the South Pacific.
Food and water have since been supplied to Koro Island along with temporary shelter. The Saranuku family now have started to look to the future and the long road ahead as they make plans to rebuild their home.
YWAM Fiji has created a cyclone response team lead by Seria Vinakadina (YWAM Labasa), Losalini Tuwere (YWAM Fiji National office), Byungok Choi (YWAM Youth Centre Suva) and Ledua Seruvatu (YWAM Vunayasi). Many YWAM operating locations from around the world have contact them with offers to help and they are coordinating with these teams to make sure they help goes to the people that need it most.
Marine Reach Fiji, based in Lautoka, is in the middle of a healthcare DTS with several doctors, nurses and healthcare professionals in the school. They will be coordinating medical work and hosting teams in the next year. Said YWAM Fiji, “YWAM Marine Reach has an excellent relationship with the Ministry of Health in Fiji and will be a huge blessing to the people that desperately need medical and spiritual help.”
You can learn more about the Fiji relief efforts and you can offer assistance to cyclone victims at the YWAM Fiji website.
YWAM’s many ministries in Fiji include evangelism, discipleship, leadership development, prison ministry, counseling, university campus ministry, Bible training, and ship-based ministry through the Mandolin, a 34-foot yacht. YWAM Fiji also trains Fijians to go as missionaries to many nations.
Inia and his wife Naomi volunteer full-time with YWAM’s medical ship The YWAM PNG, which has been working for more than two years to deliver life-saving health care and training in partnership with Papua New Guinea.
YWAM Townsville plans to send an outreach team to help rebuild Fiji and they are raising funds to help the Saranuku family rebuild. You can find out more by visiting the YWAM Townsville website.