What Happened in Kansas City 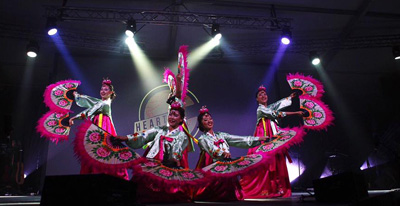 On September 10, when the last song was sung at the YWAM Together meeting in Kansas City, we had praised God and batted multicolored, polkadot balloons (that represented the spheres of society) round the huge tent for an hour or more. Then I breathed a great sigh of satisfaction and began to ask people what the event had meant to them.
So much prayer, thought and hard work had gone into YWAM Together 2016. Was it worth it? Thousands of people, young and old, had travelled from scores of nations and from across North America. A lot of money and effort had been spent. Was it worth it?
People responded to my question immediately and with enthusiasm. Some words and phrases came up again and again: “Wonderful!” “The best EVER!”  “This has been historic!” “Such an intensity of God’s presence!”  “I am so glad I was here to witness this; we will never be the same!”

A Kiss From God

Worship at YWAM Together in Kansas City

From my perspective, and many said the same, the most outstanding thing about this week has been the nearness and intensity of God’s presence. Though that is very hard to describe, I will do my best. We didn’t just worship; at times it seemed we had been lifted into God’s dwelling place. On the Thursday morning, someone had a strong impression that God wanted to “kiss us.” She went on to prophecy about the Lord showing us His affection, empowering us, going before us and carrying us on a wave of His power. It seemed like a genuine word from God at the time, but the morning and the afternoon passed and it hadn’t happened.
That evening Mike Bickle, leader of the International House of Prayer (IHOP), spoke to us and God “kissed us!” What he said was important and very affirming, but something else was more important. He spoke of the 17 years of non-stop 24/7 prayer in Kansas City IHOP and how that is just a very small part of a massive wave of intercessory prayer all over the world. He made it clear that from the beginning of IHOP in Kansas City, God had connected their hearts to YWAM. They have faithfully and intensely prayed for us all these years. During the week of our meeting they served amazingly and spent many hours praying for YWAMers who went to their prayer rooms. He also personally took on a faith challenge to recruit one million intercessors for the task of completing the Great Commission.
His message was as if the Lord was saying to every one of us, “I love you deeply and your sacrifices have not gone unnoticed in heaven.” Worship and intercession followed and, though it was getting late, no one left the tent and that is when the most significant moment of the week occurred. We were held in a heavenly embrace that was much more than affection and affirmation. It seemed that we had stepped into a new era of God’s power and enabling—of us, and of YWAMers everywhere. We will never be the same.
I have heard and read several prophecies about this new era of God’s presence and enabling and now it has begun. In most of those prophecies there is also an accompanying theme of rising opposition. In the midst of our joy and jubilation, there was also a sobering sense of greater discrimination, persecution and martyrdom of Christians all over the world. In all that lies before us, we can expect His nearness like never before.

A Sense of Belonging

As Psalm 133 states, where there is unity, God bestows His blessing. Unity with the prayer movement was just one thread that ran through our gathering. We also had senior leaders of several Bible Societies with us: Roy Peterson of the American Bible Society, Michael Perreau of the United Bible Societies and James Featherby from the British and Foreign Bible Society. We also heard from Paul Eschleman of the Jesus Film, David Garrison, author of A Wind in the House of Islam, Scott Carroll the break-through Bible archaeologist, and many more—all of whom expressed their sense of belonging to us and us to them. We are one movement! Commitments were made to make the Bible available to all people of every language, and hundreds of languages without the scripture were taken on by YWAMers and YWAM bases. (Although 93% of the world’s population have the Bible available in their mother tongue, the remaining 7% are made up of over a thousand languages.)
Another thread was not so obvious, but is nevertheless very significant. David Demian, who has a remarkably fruitful ministry over the past three decades, was also with us. His calling to a ministry of reconciliation was learned many years ago in fellowship with YWAMers. I have seen how much God is using him to heal the wounds within the Body of Christ and overcome historical divisions. God called him to “prepare the bride of Christ” many years ago and wherever he goes the Holy Spirit draws His people together across chasms of alienation. In this past few years he, and those who work alongside him, have experienced the healing power of God between Japanese and Chinese and Koreans, between Han Chinese and the many small tribal groups that have suffered at the hands of the majority and across many other long-standing divisions.
Because I helped oversee the program, I saw how the Lord used David Demian to help guide us into the place where we could receive all that the Spirit wanted to give. He wasn’t on the stage much, but he was vital to all that God did. He and the ministry he leads were joined together even more closely with our global family.

We also crossed another threshold of great import. For several years, I have had a recurring picture in my spirit. I see YWAM in a large room, but with a doorway and threshold. That threshold is the entrance into a room with no limitations—as if we are stepping out of a confining building into the great outdoors.
This is what I believe that picture means. Much of YWAM Together 2016 was organized around the spheres of social influence. It is well known that God gave Loren the list of seven spheres (he called them “mind-molders” at first) in the 1970s. You might say that was a divine signal that God wanted us to add Matthew 28:18-20 to our foundational calling of Mark 16:15. Our initial calling was to “go into all the world and preach the Good News,” but from the beginning, God wanted us to expand that commission into making “disciples of all nations” and that requires transformation in all the spheres of social influence.
Over recent years, the Lord has graciously moved us away from seeing ourselves as an organization and towards being a global family (or movement). That progression is now mostly complete so we have the freedom to convene our wider family which includes everyone who shares our values and vision and who is relationally connected. So, for the first time, we broke into “sphere tracks” where our family members who are called to education, celebration, economics, government, family, or media could join with those called to the church/mission sphere to explore God’s ways in all aspects of life.
David Hamilton has worked with hundreds of others over many years to produce an app that enables users to read the scriptures from the perspective of the spheres. We celebrated its launch on the first day. What an immense achievement! It is the SourceView app which is available without charge from either Apple or Android App stores. (It includes the SphereView feature until November.) This amazing digital tool enabled each of the sphere tracks to begin the process of studying scripture to discover much more about what the Bible says about each sphere and how they relate to one another. They identified key values and sought God about the way ahead.
Now we hope and pray that YWAM gatherings everywhere, whether local, national, regional or otherwise, will convene those who consider themselves to be part of the family from across all spheres.

There is no doubt that we have been growing in numbers and in fruitfulness over recent years, but it is still “the days of small beginnings.” Nearly seven years ago, we began to receive prophecies that 10-fold growth is just ahead of us. That is not about raising the profile of YWAM, rather it is because “the harvest is ripe and the laborers are few.” Crossing this threshold to welcome our family members in all the spheres will be part of the fulfillment of that word.
Finally, as if to underline the unprecedented unity among Christians, Pope Francis sent two video messages to YWAM Together 2016. In the first one, he encouraged us to continue to work to get the scriptures into the hands of all people everywhere. In the second, he reminded us that the current refugee crisis is a great, unfolding tragedy and he commended all who work to ease the suffering and help them settle and integrate into their host nations.
What a week we had! Videos of the sessions and wide-ranging interviews are, or will soon be, available on the YWAM YouTube channel. We have crossed the threshold and it is a new day!