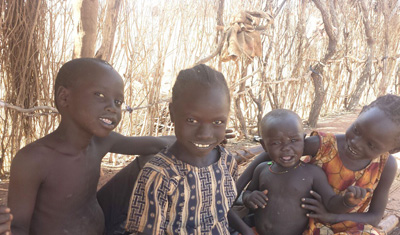 In 2016, due to fighting in South Sudan, YWAM’s workers in the country faced an urgent need to evacuate. Many of those workers are natives of South Sudan and couldn’t afford the cost of airfare. Thanks to contributions from churches and from YWAM’s emergency fund, called the Storehouse Fund, they were all able to leave safely. 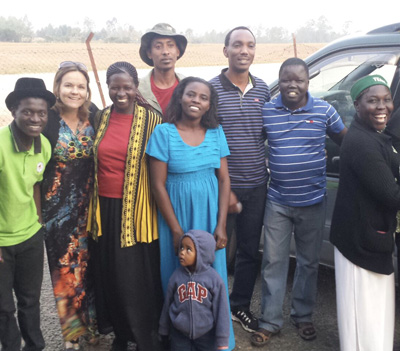 Now, as violence continues to make South Sudan unsafe for their return, the YWAMers from South Sudan are continuing to care for vulnerable people who live near their new home in Arua, Northern Uganda. They have begun to reach out to other refugees from South Sudan in villages nearby, helping these people find shelter, nutritious food, and healthcare.
Also, a team of eight from the YWAM Arua Discipleship Training School recently had the opportunity to fly back to a refugee camp inside South Sudan. Although many of them had recently escaped the violence, they sensed God leading them back into South Sudan to care for others.
For a month, they ran a seminar on knowing God and making God known. The 118 participants included 20 Muslims who were seeking God. Many of these people were the first believers from their tribes. Many come from the Nuba mountain area in Sudan. By the end of the program, some of the Muslim students had chosen to follow Jesus.
As the seminar ended, a Muslim leader talked to the YWAMers. He said in his tribe there are now 55 Christians. There were never any Christians before. But in the camp these believers had no place to worship. They were joining with Christian groups from other tribes that spoke other languages. He asked the YWAMers if they could build the believers from his tribe a church. 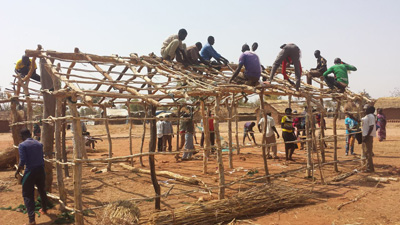 Building the church in the refugee camp

So that day the seminar participants went over to this tribe’s area of the camp and, together with the Muslim elders there, in one day they built a church.
That evening, many of those Muslim leaders joined the Christians for a service in the new church. The YWAM team showed the Jesus Film and many people gave their lives to Christ.
Team leader Vikki Wright, who together with her husband John leads YWAM Arua, is now contemplating how God will lead them next. Fifty of the tribes in the Nuba mountains have no known believers. Most of those tribes have people who have taken shelter in the refugee camp. The YWAMers have many invitations to come back.
Said Vikki, “God is looking for people to fulfill the Great Commission who will go no matter how much money is in the bank, who will have courage to face the fire, who will follow Him step by step, and possess their promised land as they extend the Kingdom of God. We don’t need to be superstar Christians, just people who will trust and obey.” 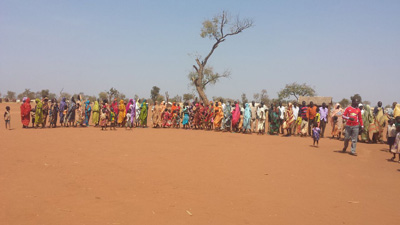 To find out more about YWAM in South Sudan, go to the YWAM South Sudan Facebook page. To learn more about YWAM Arua, visit ywamarua.org.
If you would like to help YWAM care for people in times of crisis like the YWAMers in South Sudan are going through, please make a contribution to the YWAM Storehouse Fund. After helping with several needs over the last year, the fund is depleted and needs more donations. To give, go to the ywam.org donate page and pick “emergency fund” from the list.