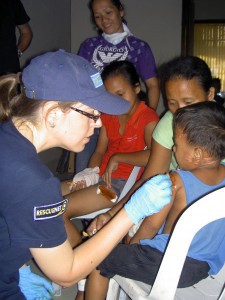 YWAM teams in the Philippines disaster zone continue to distribute relief supplies and retrieve bodies, and some workers have begun to help victims rebuild. Many teams have asked for funds to provide hammers, saws, nails and corrugated roofing.
To donate, please click here and pick “Typhoon Haiyan Relief” from the dropdown list. 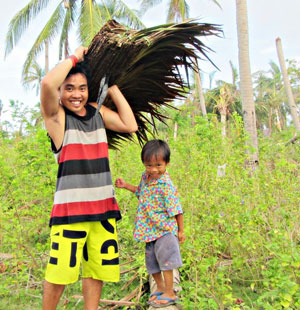 YWAM’s effort to care for the victims of typhoon Haiyan now reaches many parts of the disaster area. YWAM currently has 208 people in 19 teams working on relief and reconstruction.
Teams from the Philippines have distributed clothing and relief packages. One such team has traveled to Dulag, a hard-hit and overlooked town, with a 40-foot container of supplies and building materials. One Filipino worker with a few friends went to Bantayan Island with just a hammer and a few simple tools. Thanks to the generosity of friends, this tiny team is now helping to rebuild 20 homes.
Two groups from YWAM Korea currently are working on reconstruction. They are restoring the roof on a school in Estancia, and they also have helped individual families rebuild. In Tacloban, YWAMers with a generator assist homeless people by charging cell phones in a refugee center. They have also retrieved many bodies, 15 in one day.
In Tanauan, the RescueNet team of 19 people has turned the medical clinic over to a German organization. The RescueNet workers treated hundreds of patients in a makeshift clinic in the town hall. They also retrieved bodies, repaired the roof and provided comfort to children.
As the team left, the Tanauan mayor said, “I’d like you to know the people of Tanauan are very grateful for what you have done. You came in a time of our greatest need. You cared for our patients, helped us collect the bodies, even repaired the town hall’s roofing. You are all amazing people.”
One of those RescueNet workers, Dick Brower, a YWAM leader from The Netherlands, told about his experience.
“Our team has provided medical care to literally hundreds of people. Some had very large and deep cuts from flying debris such as metal roofing sheets. In the room next door, in our town hall, a Japanese team was treating patients. Another office was turned into a delivery room where midwives helped moms give birth to their babies. Desks were turned into operating tables and ‘beds’ to deliver on. The cooperation between the various teams in the town hall went very well. On the ground floor, local medics focused on primary health care, vaccinations and screening of patients. The vice-mayor, also a doctor, took on a coordination role for all necessary medical aid. The moment most of our team left Tanauan we were able to pass on our clinic to a team of German doctors.
“After a few days, we took the initiative to engage in search and recovery activity as well. This was a felt need in the city. Local people didn’t really know what to do with the dead. In some neighborhoods the water had just subsided and the smell of the bodies indicated where they were located. At least two armed soldiers guarded us as we went out into the city to recover bodies that locals would guide us to. While carefully wearing our personal protection equipment we put the bodies in the body bags. Some bodies we needed to dig out from under the rubble. Others were floating in the water. Often military personnel helped us carry the full body bags to the road from where they were being picked up to be buried in mass graves. We recovered 21 bodies, including five children. Our attitude and actions seemed catalytic and mobilized the local communities. Often they too engaged and helped after we got started. They were very thankful for what we did. 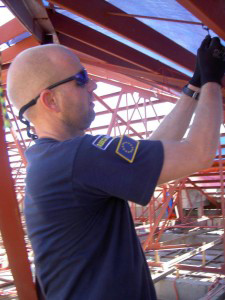 “All practical talents of our team could be fully utilized. Almost daily the guys spent some time on the town hall’s roof, which had completely blown off. With tarps, ropes and whatever we could find we tried to cover parts of the town hall in order to keep some water out. Daily we had some big rain showers. Still too much water kept coming in and many ceilings had already come down because of that. We did all we could to keep the place as dry and as safe as possible.
“In one of my roles, as communications officer, I dealt with the media and provided daily information for our blog. Almost daily we had media come through our town.
“Children are hit hard with such disasters. Survivors are traumatized because of loss of a parent, siblings or grandparents. Some of our RescueNet team members came prepared to minister especially to kids, by creating playing moments and intentionally seeking contact with them. This touched many young lives.
“Whenever we had the opportunity we tried to talk with the patients who visited our clinic. We heard their personal stories and saw many tears. With many we could pray. I remember talking to a lady whose deep head wound we had just tended, how she shared that she lost eight family members, including her husband, one child, two children-in-law and three grand children. How sad.
“One of the young midwives who worked in the town hall lost her four-year-old daughter. Every day she asked us if we had perhaps found her.
“It was obvious to us that, in spite of the ordeal that had come over these people, they were very kind and gentle. We were able to connect well with them since many speak English. That was great and helped us experience precious moments with them.
“This disaster deployment in fact was my first one. And yes, we train regularly and sometimes in an outreach context. But this was what we really train and prepare for. How privileged I found myself to be able to serve these people in this overwhelming crisis, together with God and our team. People were so vulnerable and yet so open and grateful for our help.
“All RescueNet members are volunteers. Some have ‘normal’ jobs while others of us work with YWAM fulltime. We are personally responsible for covering expenses for our training, airfares, uniforms, personal protection equipment, food, etc.
“On the day most of us left Tanauan, the town of 50,000 inhabitants had confirmed 1,246 dead and still 756 people missing. Thousands injured, material damage beyond imagination, 2,000 families who are being relocated since their residence area along the coast has been condemned. Still many needs for relief as well as more long term rehabilitation. Electricity, water, all infrastructure is broken or destroyed.
“We, the team, have experienced so much and have been able to share so much, motivated by God’s compassion. We pray that God will multiply our labor and have mercy on the survivors of this disaster. He is good, merciful and faithful in His love!”