Rebuilding After the Typhoon 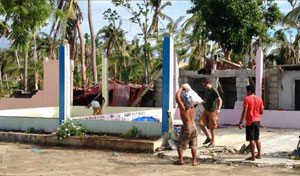 Just as the disciples called their fellow fishermen to come and help with an overwhelming catch of fish, I and the other leaders of YWAM Philippines are calling our fellow believers from around the world to come and help us in the Philippines. The needs created by Typhoon Haiyan’s devastation are immense, but the opportunity to touch hearts with God’s love and reap a great harvest is even greater. We can’t do this alone. We need your help!
To donate, please click here and pick “Typhoon Haiyan Relief” from the dropdown list.
One result of the disaster was that the walls of resistance to the gospel that surrounded the Visayan Islands collapsed in a single day, much like the walls around Jericho collapsed. We believe that God has positioned YWAM in an amazing way to respond with great effectiveness at this critical time. The Visayas are often considered the “heart” of the Philippines, so this opportunity is doubly significant. 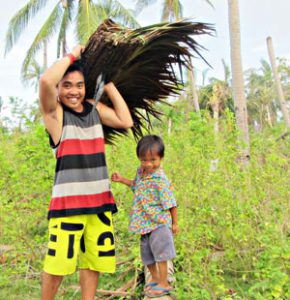 We have been amazed by the Holy Spirit’s coordination of YWAM’s response. Although communication was severely limited, our local and international teams quickly found locations as well as ways to effectively reach out to the storm victims. It soon became clear that God was leading YWAM to four strategic centers: Tacloban City, Ormoc City, Bogo City in northern Cebu Island, and northern Panay Island. From these centers we can systematically adopt and engage in rehabilitation and restoration of the smaller surrounding communities.
It has become abundantly clear that God is calling us to the long-term rebuilding of communities, both practically and spiritually. The walls are down, we are strategically positioned, and we are moving and ready to move to take full advantage of this unprecedented opportunity.
How can you engage with us? By coming yourself or sending teams of all types to help us pioneer in these four key locations and from these locations engage in the rebuilding of hope among the Filipino people. We will help your teams find housing, connect with local ministries, and discover practical ways to use the many giftings God has given to our YWAM family. Here is where you can help:
–TACLOBAN: This was the largest city affected, with the greatest degree of devastation. Homes were destroyed and local commerce was wiped out. Many YWAM teams have responded, and local officials show much favor to YWAM. Work remains to be done with housing and assisting families with small business and agriculture. We are pioneering a permanent location in Tacloban, and plan to run an international Relief-Focus Discipleship Training School (DTS) in 2014. This location will also serve as a center for ministry in Palo, Tanauan, Dulag, and Southern Samar. Would you join us in this?
–ORMOC: This city and surrounding communities also suffered large-scale damage to homes, but some basic commerce remained. Teams like RescueNet, Crisis Response International, and MercyWorks have taken initiative here. It is also a key city in the area, and we want to pioneer a permanent YWAM location here as well. Would you help us continue what has begun?
–BOGO and BANTAYAN ISLAND: Located at the northern end of Cebu Island, these scattered communities and islets lost an estimated 95% of their homes. Rebuilding is the primary work right now. We plan to establish a permanent location in this area, probably Bogo, for continued relief and outreach. There’s always room for more in the islands!
–NORTHERN PANAY ISLAND: Communities like Estancia, Aklan Province, and Kalibo were also in the typhoon’s path and were hit heavily. In Estancia, houses and fishing boats were wrecked, and with them, local transportation and livelihood. YWAM teams, especially from Korea, have partnered with YWAM Iloilo to rebuild homes and especially schools. YWAM plans to pioneer a permanent location in Northern Panay, probably Roxas City. Do you want to be part of this pioneering work?
Your teams can join some of our other “non-typhoon” locations around the nation for a couple of weeks as well. God is at work throughout the country, and we don’t want to miss any of it!
You can find phone numbers and email addresses for our Visayan outreach locations at the bottom of this page. For regular updates on YWAM’s typhoon rebuilding efforts, please visit the YWAM Philippines Facebook page.
The response of the nations in time of great need has deeply touched the hearts of Filipinos. This alone has brought hope to many, and the nation is deeply grateful. It is a “God moment” for the Philippines. Come and join with us as we respond together in a united, strategic, Spirit-led response to this great need.
–Douglas Sharpe and the YWAM Philippines National Leadership Team