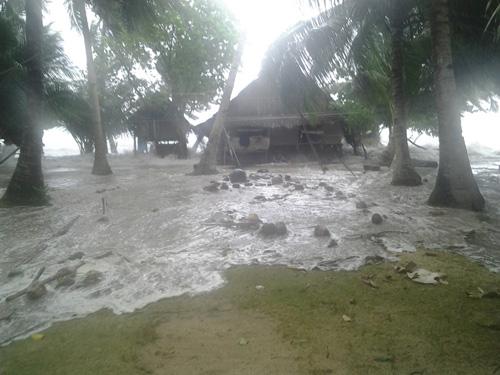 During the first week of December, super typhoon Ruby (Haguput) swept south of Guam, headed directly towards the Central Philippines. The typhoon had sustained winds of 150-175 km/hr with gusts up to 190 km/hr (114 mph). The island of Yap, part of the Federated States of Micronesia, was directly in the storm’s path. 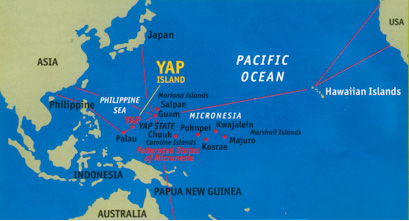 Fa’anunu Ngungutau, along with his wife and six children have been ministering with YWAM in Micronesia since 1998 and have lived in Yap since 2008. The YWAMers have been doing evangelism and Bible studies, while also caring for a church that YWAM started over a decade ago. A significant part of the team’s ministry is reaching local kids through sports.
The first week of December, Fa’anunu left to attend his sister’s funeral in the USA, unaware that a super-typhoon was forming to the east. On Wednesday, December 3, 2014 the storm swept through the northern part of the island, where the YWAM team is located. Two buildings where they were living close to the shore were damaged beyond repair. A church building on the same property is still usable. 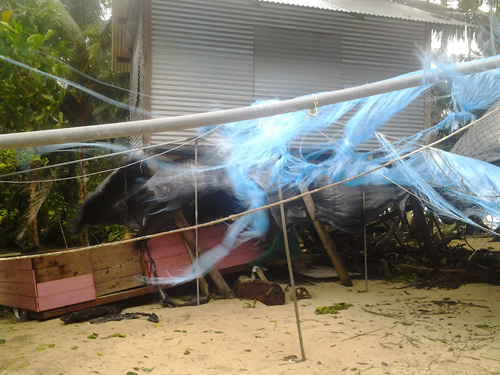 At this time the team’s plan is to start over on land which is five minutes walk from their old house in the village of Gilgal. The property has been offered for YWAM to use indefinitely. However, they need an estimated $7,000 to renovate a building that’s on the property. Praise God, $2,000 has already been donated.
Their other need at this time is finances for a ministry vehicle. They hope to purchase a reconditioned flatbed truck. The estimated cost for the vehicle is $6,000, so their total remaining need is US $11,000.
If you’d like to give to YWAM Yap, please send a check made out to “Fa’anunu Ngungutau” to
P.O. Box 1465
Colonia, YAP 96943
Federated States of Micronesia
If you’d like to contact Fa’anunu by email, click here.