Homes for the Poor 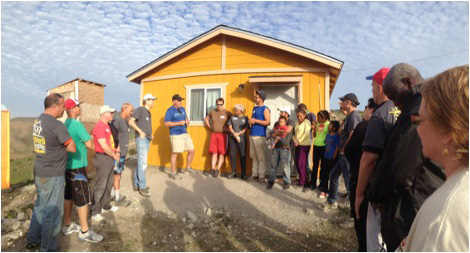 During the week of Christmas, 2015, People Magazine named Sean Lambert, founder of YWAM’s Homes of Hope ministry, its Hero of the Week. This year Homes of Hope International celebrated 25 years and over 5,000 homes built for impoverished families across the globe.
This worldwide movement of what Sean calls “Love Your Neighbor Parties” started with building just a single home 25 years ago. 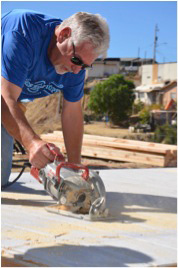 In May of 1990, Sean and 11 others traveled from Los Angeles to Tijuana to build one house for a needy Mexican family. Sean’s three-year-old daughter Andrea came along. As the team built the house, Andrea noticed a family living in an abandoned bus nearby. She asked Sean, “Daddy, are you going to build a house for the bus people too?”
Sean said, “Her words touched my heart and echoed in my head all the way back home. When I got back to Los Angeles, I began calling various youth groups who were scheduled to join us in Tijuana that summer for outreach.”
Several groups accepted Sean’s challenge. Over the next year, they built 12 homes for the poor.
Now, after 5,000 homes built in 21 countries by over 100,000 volunteers, Sean says, “Giving a family a home is more than just showing mercy to them; it’s a transformational act that can help break the cycle of poverty in that family’s life.”
Sean says that children who come back to a home are three times more likely to stay in school.
Families who receive a home must own the land their home will be built on. “I’ve found if you have a giving equation where someone puts in financially equal at least in some way to what you’re going to give them, it works,” Sean says.
A survey done of Homes of Hope housing in Ensenada showed that 93% of the recipients were still living in their homes ten years later. 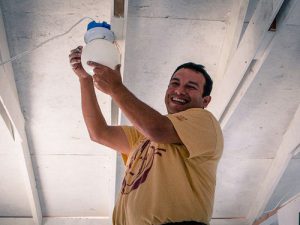 Eric Ochoa installs a light in a Homes of Hope home

In 2010, Eric Ochoa lived with his family in a six foot by six foot shack in Tijuana, Mexico. Then a Homes of Hope team built his family a house, and now he helps Homes of Hope assist others. He says, “We want other families to have a roof over their heads and to feel the same hope and security that we now have. We want other families to realize that God loves and cares for them.”


May we use cookies to give you the best experience on this website? More info No thanks Yes