Keeping a Doorstep in San Francisco 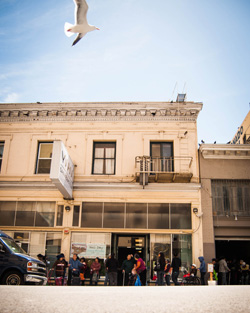 Real estate experts say that the most important aspects to consider when purchasing any property are: location, location, and—you guessed it—location. Resting in the middle of San Francisco’s “Tenderloin” district, a region infamous for its violent street crime, sex trafficking, homelessness, and illicit drug use, our 357 Ellis Street property at YWAM San Francisco could not inhabit a more strategic location. Thirty thousand people populate the 33 blocks surrounding our premises, speaking more than 25 different languages. These 25 languages represent peoples from Yemen, Vietnam, Pakistan and many more nations.
On the morning of July 1, a man we’ll call “Henry” shuffled into our building’s drop-in center. It had been yet another week of cold nights sleeping out on the sidewalk, and of feeling hopeless from deep drug addiction. “Talk to me about God,” Henry bluntly asked Janet, a staff member and grandmother widely loved around the Tenderloin for calling everyone “Treasure” and “Precious,” as well as for her becalming British accent. Janet proceeded to share about Jesus, His love, and how one can receive forgiveness by repenting of their sins. She explained that God forgives our sins and unconditionally loves, despite knowing the worst about us.
This was not the first time a conversation like this had occurred between Janet and Henry. They had talked about God several times before, but today’s ending was different. “Can I pray now to ask Jesus to forgive me and change my life?” Henry responded. “I do want to change. I do want to love Him after all that He did for me.” Minutes later, Henry’s hands were folded. He talked to God as if they had been old friends, and asked the Lord into his life.
From under the roof of our ministry loca 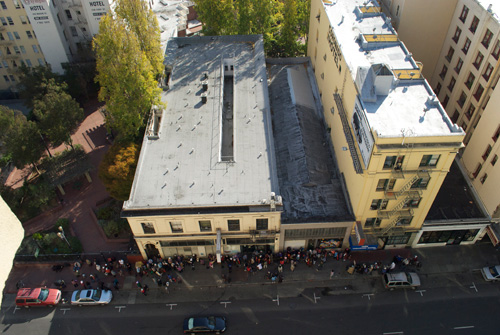 tion and just beyond its doorstep, stories like this are not uncommon. YWAM San Francisco has been operating out of its two adjacent Ellis Street buildings since 1995, and we believe that God wants us to stay here.
Our main building, built back in 1908, is currently home to 30 full-time staff. Within its walls, food is passed out to over 250 people through a weekly food pantry. Over the past twelve years, more than 16,000 people have participated in short-term outreach from our facility, 377 people have attended our six-month residential Discipleship Training School, and more than 100 staff members have joined us for at least two-year commitments. Diverse ministries, which cater to a wide variety of the city’s needs, grow and function from within our buildings. Amidst the missions that have been at our doorstep for the past twenty years, we have seen the Lord transform countless lives.
Meanwhile, the real estate market in San Francisco is hotter than it’s ever been. Companies are expanding rapidly enough to where they can snatch properties and tear them down to build apartments and commercial buildings. At the end of May, an unsolicited cash offer to our landlord of $3.75 million was made for our property. Our landlord has always refused to sell, until now.
Since this offer was made, we have moved forward to raise over $900,000, and have declared our intention to purchase the buildings. However, we are still in need of $300,000 in donations by July 25th in order to prove our financial strength so that we can purchase and keep YWAM on Ellis Street. At the same time, we are ultimately striving to raise the entire $4 million to purchase the property, so as to own it debt free by September 23 and minimize any loans that we must take. As we pray for this miracle, we hold fast to the words of Psalm 20:7: “Some trust in chariots and some in horses, but we trust in the name of the Lord our God.”
The property of 357 Ellis Street is a launching point of God’s provision for the city of San Francisco, and that is why it is so important that we stay in this strategic location, with people like Henry right at our doorstep. Visit www.ywamsanfrancisco.org/miracle/ to see how you can be a part of the miracle.
–by Aylin Awbrey