Joy Dawson, Lover of Jesus, is Safe at Home in His Arms at 96 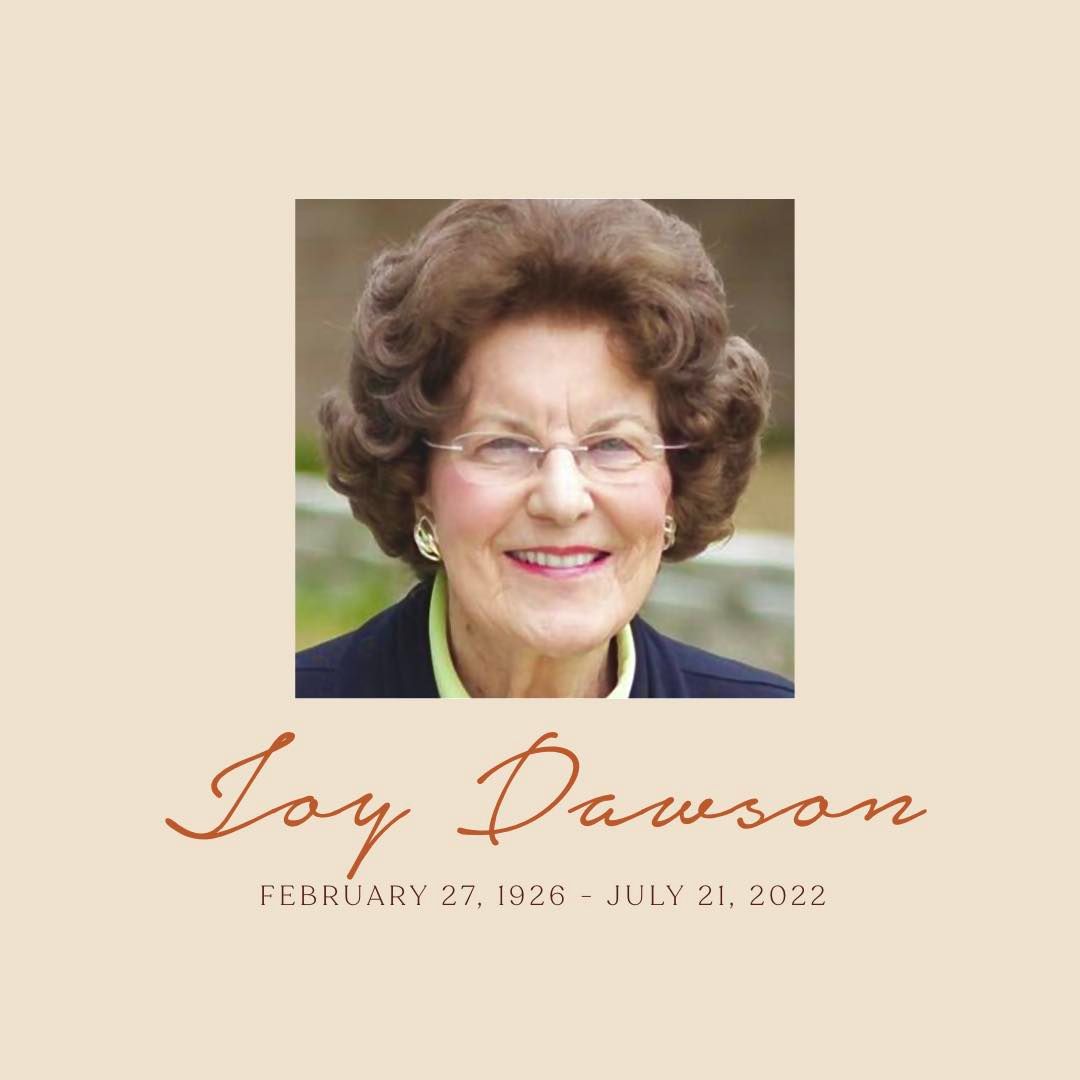 Joy Dawson had a catalytic impact in YWAM from its earliest days, helping to build our foundational teachings on Hearing God’s Voice, Intercessory Prayer, the Fear of the Lord, the Nature & Character of God, Instant Joyful Total Obedience, 100% Honesty and oh, so much more! She was known for her intensity and diligence in delivering whatever God spoke to her to teach, for however many hours it took to teach it! Often, in the midst of a session, she would break into adoration of the Lord: “He is indescribable, amazing, unfathomable, beautiful, worthy, unsearchable, lover of my soul……” The list could easily go on for ten minutes, and one had the sense that she was actually gazing into the eyes of Jesus as these adjectives flowed out of her heart toward Him.

One thing we knew: if Joy was going to be speaking, you had better pray for her! She would often ask at the beginning of a session who had or had not prayed for her, by a show of hands. And this would be accompanied by an exhortation to ALWAYS come to any meeting having prayed diligently for the speaker and coming with an expectant heart to hear God through that person!

Loren Cunningham “discovered” Joy through a Divinely-orchestrated meeting in New Zealand in 1967. At that time, she was simply a godly housewife who had dedicated herself to intercessory prayer and learning the ways of God. As Loren spoke with her and realized the depth of wisdom, insight and teaching that God had deposited within her, he asked whether she had ever publicly taught any of the truths she had discovered. He found out that she was part of a denomination that did not believe in women teachers or leaders. Loren gave Joy her first international invitation to teach at a School of Evangelism at YWAM Lausanne, Switzerland in 1971.

From that point onward, for decades, Loren and Joy were a foundational teaching team in YWAM – Loren as the Apostle and Joy as the Prophet (she called him “Bro”). That led to a lifelong global ministry of teaching for Joy that took her to 55 nations on six continents and impacted YWAM, the body of Christ and all of eternity as hundreds of thousands – likely millions – were drawn closer to Jesus through her ministry.

Though Joy was very focused and purposeful in ministry, she had a great sense of humor and lived her name – she was full of the joy of the Lord. On her birthday each year, she would do a cartwheel for every year of her life. When speaking at YWAM Denmark on her birthday in 1973, she did 47 cartwheels!!  They gave her an unusual birthday gift: an egg, a fish and some Danish woolen socks. Why? Because back in those days, if you asked Joy “how are you?” she was likely to reply, “I’m as relaxed as a poached egg, as fit as a Taupo trout, and blessed out of my socks!”

Joy was not only a world-renown teacher, but an avid writer, having authored many books. Among them were Forever Ruined for the Ordinary; How to Pray for Someone Near You Who is Away from God; Influencing Children to Become World Changers; Intercession – Thrilling and Fulfilling; Some of the Ways of God in Healing; Knowing God; Jesus the Model; Intimate Friendship with God; The Fire of God; All Heaven Will Break Loose and her final book, in 2021, My Journey with Jesus.

Joy was married to her husband Jim for 65 years, until he went to be with Jesus in 2013. They were not only in love with each other, but both in love with Jesus and fully committed to each other’s ministries. Jim served as a spiritual elder on YWAM’s International Council from its inception in 1972 and was known as “YWAM’s Pastor,” traveling, listening and ministering to people on a personal basis.

Joy is survived by her son John (Julie) and daughter Jill (John Bills), who all serve in leadership in YWAM. She is also survived by a multitude of missionary grandchildren and great-grandchildren, who among them represent six languages and seven nationalities.

A Memorial service for Joy Dawson will take place at The Church On The Way, in Van Nuys, California on August 2nd at 1:00pm. All are welcome to attend. The service will also be livestreamed: http://tcotw.org/live Written by Dawn Gauslin