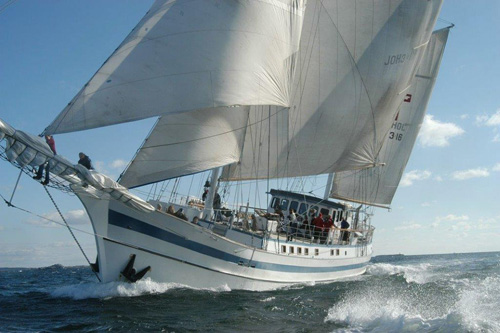 YWAM has 22 vessels serving in a wide variety of conditions around the world, working to improve the quality of life for isolated people. We have small cruise ships, river boats and deep-sea yachts all working in a cyclical pattern within their region. Some go out for two weeks at a time, others are deployed for months far from home relying on containers for supplies.

Some are linked to just one YWAM center, while others have the support of several. Most vessels host teams of University of the Nations students on their field assignments alongside crew and medical volunteers. Many vessels provide dental and medical assistance to people who have little or no access to medical care. Some vessels look like floating YWAM bases, while others simply carry students to isolated villages like the boat at Outpost Panama serving the Ngobe tribe.
Most YWAMers are unaware of the growth of our fleet that has happened over the last several years. By the time you read this we should have three additional yachts joining our fleet, one each from Germany, Australia and Hawaii.

As a result of our ship-based ministry, YWAM has received unprecedented favor in countries like Papua New Guinea (PNG). After seven years of trust being built up by YWAM Medical Ships Australia serving in PNG, government officials, specifically the Prime Minister and his cabinet, have asked YWAM to come in through the front door of education and establish a university system throughout the nation where only 1% have traditionally had the opportunity to attend higher education.
The University of the Nations and Ships were born to work together in such a partnership as “twins” since 1978. YWAM’s founder Loren Cunningham wrote about this in his book Is That Really You God? Serving PNG is an amazing window of opportunity to significantly effect a nation and because of the good will that has been created, other doors are swinging wide open too!
YWAM invites you to join us during April for our global prayer, called The Invitation, and intercede with us for our ship-based ministries. Many of us will pray on our prayer day, April 14.

“Sing to the Lord a new song, his praise from the end of the earth, you who go down to the sea, and all that fills it, the coastlands and their inhabitants” (Isaiah 42:10, ESV).

Pray for the opportunities in Papua New Guinea (PNG):

Pray for YWAM ship-based ministry around the world:

The largest vessel in the fleet is the m/v (motor vessel) YWAM PNG. She is deployed in Papua New Guinea in the southern region of the country. She is operated out of YWAM Townsville Australia and well known both in PNG and along the east coast of Australia. She has recently been outfitted with new operating rooms and is currently deployed with over 100 volunteers. Reach out to Ken here.

The m/v PACIFIC HOPE is operated by Marine Reach out of Tauranga New Zealand and focuses her efforts primarily on the nation of Vanuatu. She is our second largest ship in the fleet with surgical suites on board and conducts primary health care clinics ashore. You can reach David here.

The m/v PACIFIC LINK is deployed among the islands of Papua New Guinea in the north. She has been operated by YWAM Ships Kona since October 2015 with an operating room on board and mobile clinics ashore. She has 50 beds and is deployed 10 months of the year in PNG. Reach Brett here.

The s/y (sailing yacht) NEXT WAVE – Serving the multitude of Syrian refugees arriving daily in Lesvos, Greece. This schooner is uniquely positioned to host teams as they provide assistance to the 2,000+ refugees pouring into the region close to where the ship is docked. You can reach the Next Wave office here.

The m/v AMAZING GRACE is a new vessel that will soon run Homes of Hope as her unique contribution to ministry around the Sea of Cortez – Baja Mexico. She is ideally situated to bring hope to remote fishing villages within a few days sail of Mazatlan. Reach Ikaika here.

The s/y CLOUD NINE works among the remote atolls of the Marshall Islands. She partners with YWAM Ships Kona in the Pacific and conducts clinic work from the Kwajalein Atoll in some of the most beautiful yet isolated locations in the world. Connect with Scott Suderno here.

The s/y MANDOLIN serves out of New Zealand up into Fiji carrying Bibles and conducting water testing on wells with an onboard lab as she sails from island to island. She is in her first year of service within the liquid continent. You may reach out to Hinrich at this email address.

From the YWAM Mendocino base comes MAKING WAVES.  She is a boat ideally suited to gain access to the Ngobe Indian tribes living along the rivers and inner coastal waters of northern Panama (Caribbean Sea). She makes day trips from YWAM’s Outpost Panama base. There are over 50 Ngobe tribes living within a day’s sail. Access otherwise means at least two days in a four wheeled drive vehicle then hiking a day to reach some of them. Reach Tom or Nathan.

The river boat NADEZHDA serves on the 3400 mile Ob River in Siberia. The climate is harsh enough that they can only serve for a small number of months each year before stopping for the annual freeze. These places are VERY isolated and cold. Andy would love to hear from you.

There are three river boats at the Iquitos base on the Amazon River. Their first boat is called FILIPE. They run volunteers up tributaries deep into the Amazon and are situated in Peru. These long fast boats are ideal for their environment serving some of the most challenged villages you can find. You can reach Clark here.

The river boat SAO MATEUS is a familiar sight on the Amazon carrying medical teams up and down the river for years. She is situated at the base in Manaus 1,000 miles from the ocean. You may reach Belino at the Manaus base at this email address.

The river boat AUSTRALIA II also works on the Amazon from Manaus. She is an aluminum boat taking day trips along the tributaries of the Amazon with teams of volunteers and students. You can reach the Manaus base concerning this vessel by contacting Belino.

The river boat BETESADA works at the mouth of the Amazon and takes medical teams for two weeks at a time deep up the tributaries ministering to the tribes along the river banks. You sleep in the villages and move to new locations during the day. Amazon Reach is in the process of adding an additional boat for work from the same location. Email Joe.
The river boats LETICIA. There are two boats that work along the banks of the Amazon river in southern Colombia reaching villages that are remote with their students and volunteers. Reach out to Jamie.
In South East Asia there is a medical river boat that serves quietly in a Muslim nation out of YWAM. Her crew are all heroes. Pray for their safety and funding needs.
Take Action:

Upcoming topics for The Invitation

May 12, 2016 – Praying for YWAM buildings.
June 9, 2016 – 30 Days of Prayer for the Muslim World.
The second Thursday is just a suggestion. Feel free to pray close to that date at a time that works well for your location’s schedule.
Don’t Miss The Invitation:
–Sign up for prayer updates. Go to ywam.org, find the “Stay Connected” box on the home page, put in your email address and click “Sign Up.”
–Download prayer updates in a specific language. Go to ywam.org/theinvitation. (Currently available in Spanish, Portuguese, French, Indonesian, or request other languages.)
–If you sense God giving you a word or a direction for YWAM’s prayer, please contact us.